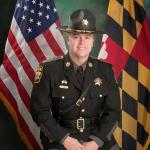 Sheriff Lewis retired as a Sergeant with the Maryland State Police Pro-Active Criminal Enforcement Team (PACE) after twenty-two years of loyal and dedicated service.  In addition to his duties as the agency’s leading Drug Interdiction Expert, Sheriff Lewis was directly responsible for the training and educating of all Maryland State Police personnel in the Criminal Interdiction Venue or “looking beyond the initial traffic stop” while enforcing Maryland’s traffic laws.

During his twenty-two years as a Maryland State Trooper, he made many nationally recognized seizures of COCAINE found hidden inside electronically controlled compartments within motor-vehicles along the East Coast.

Sheriff Lewis has trained tens of thousands of law enforcement officers extensively throughout the United States and Canada as well as other parts of the world to include; Australia, London, Germany, Russia & the West Indies.   Sheriff Lewis has been judicially recognized by the federal & state courts of this country as an EXPERT in the areas of Traffic Stops, Highway Interdiction, Hidden Compartments & Drug Valuation.

Retired from the Maryland State Police on July 1st, 2006, he was elected SHERIFF of Wicomico County, Maryland on November 7th2006, and is currently serving his 4th consecutive, 4-year term.  Sheriff Lewis serves a county of over 105,000 citizens, along with 96 sworn deputies, and five canine handlers.

Sheriff Lewis is past President of the Maryland State Sheriff’s Association where he served the interests of 23 fellow sheriffs and nearly 2000 deputies from across the State of Maryland.